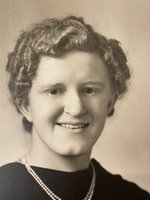 Dorothy E. Bartz of the Town of Royalton, NY, passed away on Friday, April 9, 2021 in Absolut of Gasport. Born on March 13, 1923 in the Town of Royalton, she was the daughter of the late Raymond and Ruth (Ernest) Jones. She was a 1941 graduate of Akron High School and married Robert E. Bartz on January 28, 1952. He predeceased her in 1996. Dorothy spent many years working on her parent’s farm. Private graveside services will be held in Cold Springs Cemetery. Memorials may be made to Niagara County 4H. Arrangements entrusted to Lange Funeral Home, Inc.