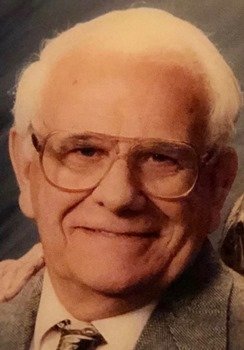 Howard Jay Collins, 92, passed away peacefully at Eastern Niagara Hospital in Lockport on December 17, 2017. Born at home in the Town of Hartland, he was the son of the late Roland and Helen (nee Whitmore) Collins.

Howard loved playing cards, betting on the horses, going to the Casino, and scratch off tickets. He had a green thumb and was proud of his flowers and loved to garden. Howard served honorably in General Patton’s 3rd Armored Division of the Army during World War II. He fought in the Battle of the Bulge and was one of the first troops to free the Concentration Camp Buchenwald Germany. After the war, Howard met the love of his life, Shirley (nee Hartner). Together Howard and Shirley had 5 children.

Howard is survived by a brother, Donald Collins, his children Debra (late Richard) Graham, Janice (Joe) Collins, and Timothy (Kelly) Collins. Howard was a proud Grandfather to 11 and Great-Grandfather to 10. He will be dearly missed by numerous extended family and friends.

Friends may call on Wednesday 12:00 – 2:00 PM at LANGE FUNERAL HOME, INC., 186 East Ave., Lockport. Entombment in Glenwood Cemetery will follow. In lieu of flowers, memorials may be made to Wreaths across America or the American Heart Association. Condolences may be offered to the family at www.langefuneralhomeinc.com

Share Your Memory of
Howard
Upload Your Memory View All Memories
Be the first to upload a memory!
Share A Memory
Plant a Tree