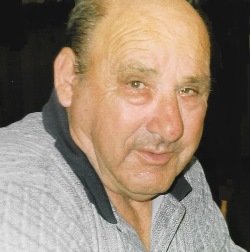 Please share a memory of Bernard to include in a keepsake book for family and friends.
View Tribute Book

and was an appliance repairman retiring from Montgomery Ward. Bernie enjoyed hunting, fishing, camping and traveling.

Friends may call on Thursday 4:00 – 7:00 PM at LANGE FUNERAL HOME, INC., 186 East Ave. Private interment in Cold Springs Cemetery. Memorials may be made to the Veterans Charity of One’s Choice. Condolences may be offered to the family at www.langefuneralhomeinc.com

To send flowers to the family or plant a tree in memory of Bernard Berube, please visit Tribute Store
Thursday
9
August

Share Your Memory of
Bernard
Upload Your Memory View All Memories
Be the first to upload a memory!
Share A Memory
Send Flowers
Plant a Tree