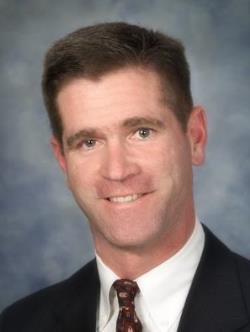 An Eagle Scout, Bob was a 1976 graduate of Dunkirk High School. He was elected Treasurer of his class for all four years, earning letters in varsity football and track. Bob received an appointment to attend the United States Military Academy at West Point where he represented his company in the Sandhurst Competition. Graduating in 1980 as a Second Lieutenant, Bob served five years in the Army Corps of Engineers and graduated from the United States Army Ranger School, an elite combat leadership course.

Bob left his military career with a rank of Captain and began his civilian career as a Project Manager in Civil Engineering for Mobil Corporation.  In this role, Bob traveled extensively throughout Asia, Great Britain, and New Zealand, living internationally for several years. Bob’s adventurous spirit always resulted in amusing and entertaining travel stories.

After taking time out to receive a Master of Business Administration from the University of Pennsylvania Wharton School in 1992, Bob started his first business called Wills Lawn & Landscaping, an organic landscaping business that he operated for 10 years. Continuing his education, Bob later earned his designation as a Certified Financial Planner (CFP) and started a second business as an independent Financial Planner associated with Waddell & Reed. His financial investment expertise combined with his reputation for integrity and relentless work ethic allowed Bob to build a highly successful client portfolio. Literally hundreds of clients benefitted from Bob’s financial acumen. Bob hosted his own radio show on Buffalo Station WLVL for several years, focused on Financial Planning.

Bob was extremely active in the Buffalo community, serving as past President of the Network in Aging of WNY, as well as a Long-Term Care Ombudsman, and volunteer for AIDS Family Services.

What made Bob an incredibly special person was that despite his numerous accomplishments, he was so humble and unassuming. He was sincere, incredibly fun, inclusive, loyal, and such a giver of himself to his family, friends, and people in need. He was a very courageous and dedicated person, continuing to serve his clients while fighting his illness to the end.

Bob’s family would like to express their deep appreciation to Dr. Iyer, Dr. Tomaszewski, and the wonderful medical staff at Roswell Park Comprehensive Cancer Center for their expertise and loving care of Bob.

A celebration of Bob’s life will be held on November 9, 2018 at the Ebenezer United Church of Christ, 630 Main Street, West Seneca, New York 14224, beginning at 11:00 AM. In lieu of flowers, please consider making a donation in Bob’s name to the Roswell Park Alliance Foundation, P.O. Box 631, Buffalo, New York 14240. Condolences may be offered to the family at www.langefuneralhomeinc.com

To send flowers to the family or plant a tree in memory of Robert Wills, please visit Tribute Store
Friday
9
November