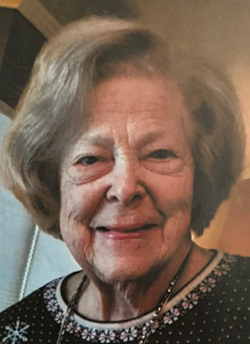 Obituary of Carol B. McIntosh

Please share a memory of Carol to include in a keepsake book for family and friends.
View Tribute Book

Carol B. McIntosh of Lockport, NY passed away peacefully on Friday December 7, 2018 in Niagara Hospice House. Born December 17, 1933 in Lockport, she was the daughter of George and Helen Coulter Bewley. Carol graduated from Lockport Senior High School and Cornell University. In 1956, she married Douglas McIntosh, a surveyor and the entrepreneurial founder of MAC’s Antique Auto Parts founded in 1978. Carol worked as a Home Economics teacher at Lockport High School and later worked with her husband at MAC’s Antique Auto Parts. In 1989, she passed the Florida Condo Manager Exam and became the assistant manager of Errol By the Sea Condominium in New Smyrna Beach, FL. Years after Doug’s passing in 1999, she met Edgar Wright, who became her longtime companion until he passed away in 2017.

Carol was accomplished at knitting, sewing, cooking and crafts. She also loved playing Bingo, shuffle board, joining in sing-alongs and ballroom dancing. She was a meticulous and gracious hostess and entertained friends and family often. She was active in her church and community and was a dedicated longtime member of both PEO and Lockport College Women’s Club. Her family remembers her as a kind, loving, giving and supportive mother, mother-in-law and grandmother who encouraged all of them to pursue their goals and happiness in life.

Friends may call on Wednesday 4:00 – 7:00 PM at LANGE FUNERAL HOME, INC., 186 East Ave. Funeral services will be held on Thursday at 11:00 AM at Emmanuel United Methodist Church, 75 East Ave. Interment in Cold Springs Cemetery. In lieu of flowers, memorials may be made to Niagara Hospice, Inc. or the charity of your choice. Condolences may be offered to the family at langefuneralhomeinc.com.

To send flowers to the family or plant a tree in memory of Carol McIntosh, please visit Tribute Store
Wednesday
12
December

Share Your Memory of
Carol
Upload Your Memory View All Memories
Be the first to upload a memory!
Share A Memory
Send Flowers
Plant a Tree