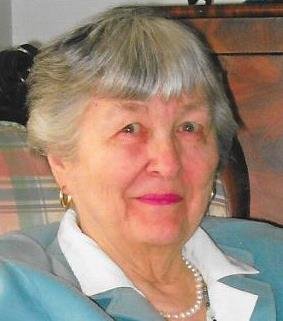 Please share a memory of Mary Louise to include in a keepsake book for family and friends.
View Tribute Book

Mary Louise Barry Storrs, 90, of Lockport, died peacefully at home on February 12, 2019. She was born on August 3, 1928 in East Aurora, NY, the daughter of the late Louise Jones of Lockport and Lewis J. Fisher. She was a graduate of the Knox School in Cooperstown, NY, and earned a Bachelor’s Degree from Skidmore College in Saratoga Springs, NY. In 1950, she married Lockport teacher and artist William W. Storrs. She was a member of First Presbyterian Church, where she served both as a deacon and an elder. She had been a member of Lockport Junior Service League, the Kenan Arts Council, the Kenan Center Board of Governors, and the New Century Club. A talented needleworker, she was a teacher of needle arts and co-owner for many years of a popular needlework shop in Williamsville, NY called The Aardvark’s Needle. She was a participating artist in the early years of the Kenan Center’s 100 American Craftsmen, and a founding member of the Buffalo, NY chapter of the Embroiderer’s Guild of America, Inc., an organization of which she served as national president from 1999 to 2001.

She is survived by her three children: Cynthia S. Cotten, of Lockport; William E. Storrs of Delmar, NY; and Emilie W. Storrs; of New York City; and three grandchildren, Amanda B. Paveglio, of State College, PA; Christopher S. Cotton, of Washington, DC; and William W. Storrs, of Delmar, NY. She was predeceased by her parents, her husband, and a younger brother.

A memorial service will be held at First Presbyterian Church, 21 Church St., Lockport, at 11:00 a.m. on Saturday, April 13. Memorial donation may be made to the Lockport Public Library, 23 East Ave, Lockport, NY  14094. Condolences may be offered to the family at langefuneralhomeinc.com.

To send flowers to the family or plant a tree in memory of Mary Louise Storrs, please visit Tribute Store
Saturday
13
April

Share Your Memory of
Mary Louise
Upload Your Memory View All Memories
Be the first to upload a memory!
Share A Memory
Send Flowers
Plant a Tree