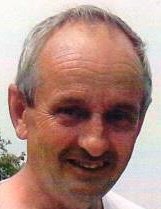 So sorry in the passing of your loved one . Keeping you all in my thoughts and prayers . May God Bless you with His comfort and Love.

On behalf of the Bertrand and the Hartley families, I offer our condolences on Gerald's passing. As you may know, of Homer and Rose (Colopy) Wilson's 3 daughters, the eldest was Norma (Wilson) Hartley, and the youngest was Lois (Wilson) Bertrand, my mother. Jerry and I were cousins of the same age. We were in the same grade throughout school, and, in high school, sat next to each other in a German class. During the 1950's and 60's, the Colopy's and Wilson's ( including the Bertrand's and Hartley's) held regular family re-unions in Lockport. Jerry's father, Emerson ("Bud") and his mother, Ruth - as well as other Colopy's) - were frequent visitors at our home on Locust St.. Bud would sometimes give an impromptu slide-show of his and Ruth's excellent photography. I always enjoyed Jerry's company - as a friend, a cousin, and a classmate. I will always hold a vivid and fond memory of him.

Rick Bertrand and the Bertrand family

Share Your Memory of
Gerald
Upload Your Memory View All Memories
Be the first to upload a memory!
Share A Memory
Send Flowers
Plant a Tree