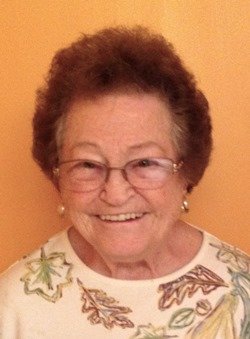 Please share a memory of Vera to include in a keepsake book for family and friends.
View Tribute Book
Words fall short trying to capture the value of one human being who loved so fully. At 95 years young, Vera C. Scheer of Lockport NY entered into eternal life on December 15, 2019 at Niagara Hospice House. Born June 27, 1924 in Buffalo, NY, she was the daughter of Warner and Oline Stone Carlson. Her vibrant school years were at Gasport High (K – 12 in one building where the Gasport Post Office now stands). She played clarinet in the band and loved singing in her church choir. She worked for Harrisons in the timekeeping department. Gasport and Lockport girls would take a bus to the dances that were for soldiers stationed at Fort Niagara. Topping Vera’s list for future spouse characteristics was that he be a good dancer! Thus began her romance with Everett culminating with their military wedding at Fort Niagara on February 19, 1944. Just prior to what would have been Everett’s army discharge WWII broke out and he served throughout the duration of the war. Their marriage commitment, during this hard time in history, strengthened their love for one another and life itself. Both Vera and Everett (who was born and raised in Brooklyn) overcame difficult pasts to create an amazing idealized life for their two children in Lockport. Vera advanced from a secretarial position for John Hancock becoming one of their first female agents. She then became a Saleswoman for Metropolitan Life Insurance Company from 1964 to her retirement. For over 20 years she was respected and recognized as a woman pioneer in a very male-dominated field, earning several President’s Awards and annual conference trips for top sales people each year. More importantly was Vera’s role and impact as a wife, mother, grandmother, great-grandmother and aunt. Her cheerfulness went everywhere she set her foot to. She was a loving, kind, generous, and spirited woman who graced our lives to the highest degree. Wife of the late Everett F. Scheer, she is deeply missed by her children, David (Laura) Scheer and Cynthia (Jack) Landrigan; five grandchildren, Christopher (Lauren) Landrigan, Elisha (Ryan) Han, Renee Landrigan, Michael and Cara Scheer; three great grandchildren, Julia, Natalie, and Summer and her very beloved nieces and nephews. Predeceased by two siblings, Woodrow Berg and Margaret Jesson and one great grandson Silas Jack. Burial in Cold Spring Cemetery will be private. Because the family was unable to have a service when Everett passed away in 2009, David and Cindi wish to celebrate and honor both their parents’ lives at a Memorial Service at Freedom Church (formerly Faith Tabernacle), 5676 Beattie Ave on Saturday FEBRUARY 29, 2019. The family will be available at 10 am, service at 11 am and a luncheon following the service. Condolences may be offered to the family at langefuneralhomeinc.com.
To send flowers to the family or plant a tree in memory of Vera Scheer, please visit Tribute Store
Saturday
29
February

Share Your Memory of
Vera
Upload Your Memory View All Memories
Be the first to upload a memory!
Share A Memory
Send Flowers
Plant a Tree