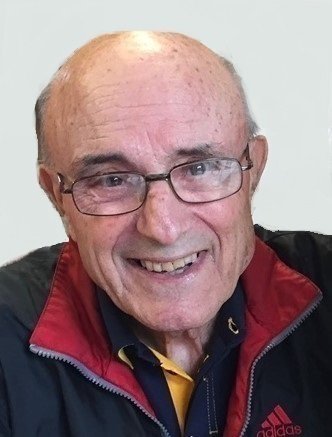 Please share a memory of Joseph to include in a keepsake book for family and friends.
View Tribute Book
Joseph C. Farrugia of Lockport, NY, passed away on Thursday, February 11, 2021 in Buffalo General Hospital. Born on May 12, 1930 in Albion, NY, he was the son of the late Carmelo and Josephine Sanfilippo Farruggia. Joe married the former, Nancy McGraw on July 16, 1951 and then proudly served in the Army during the Korean War from 1951 – 1953. Retiring in 1987 after 38 years, Joe was a Senior Product Designer for Harrison Radiator Division of GMC. He was an accomplished baseball player, bowler and golfer. Also, was an avid wine maker and “taster”. Joe and Nancy were Florida residents for years and just recently returned to Lockport. Surviving Joe are his wife of 70 years, Nancy McGraw Farrugia; three sons, David (Sharon), Joseph (Karen) and Michael (Shinobu) Farrugia; nine grandchildren, Brendon (Erin), David, Jr., M.D (Marissa), Thomas, DDS (Jamie), Jason (Dr. Kelly Aylsworth) , Mark, M.D., PHD (Alison, PHD), Joseph (Venous) , Jack, Keira, and Maya Farrugia; great-grandfather of Kayden, Nina, Leah, Jaxsen, Emma, and Nora; brother of Rosalie (Ronald) Gursling and uncle of several nieces and nephews. Services will be announced at a later date. Burial will be in the Western New York National Cemetery. Memorials may be made to JDRF. Condolences may be offered to the family at langefuneralhomeinc.com.
To plant a beautiful memorial tree in memory of Joseph Farrugia, please visit our Tree Store

A Memorial Tree was planted for Joseph
We are deeply sorry for your loss ~ the staff at Lange Funeral Home, Inc
Join in honoring their life - plant a memorial tree
Online Memory & Photo Sharing Event
Online Event
About this Event

Look inside to read what others have shared
Family and friends are coming together online to create a special keepsake. Every memory left on the online obituary will be automatically included in this book.
View Tribute Book
Services for Joseph Farrugia
There are no events scheduled. You can still show your support by planting a tree in memory of Joseph Farrugia.
Plant a tree in memory of Joseph

Share Your Memory of
Joseph
Upload Your Memory View All Memories
Be the first to upload a memory!
Share A Memory
Plant a Tree